God has warned us about false prophets. These warnings are in the verses of the Holy Bible, and in effect, since the Ancient times up to this date.

Recently, we were disturbed by an alleged ‘mysterious disease’ which occured in Pangasinan – an Ilocos province located at 191 kilometers from  Manila, Philippines.

Reports were sensationalized by a giant TV network calling it a ‘flesh-eating disease’ just to fit in to an alleged prophesy of a self-proclaimed Indian prophet. Eventually, health authorities denied such reports upon confirming the diseases are curable.

I am not against any prediction or any prophecy whatever you may call it, but I am against the 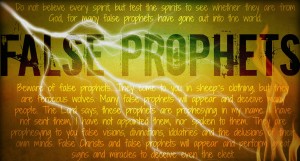 way these ‘prophets’ inform people about the forthcoming events.

I humbly suggests that instead of SOWING FEAR into the hearts and mind of the people, we should encourage them to reverse what could be the foresighted events because I believe ‘collective positive consciousness’ could make our world a better place and not to destroy it.

I am not saying we can stop calamities such as storms, earthquakes, floods and volcanic eruptions because we cannot really stop them (as part of the natural cycle of this planet), though we can avoid or do some actions to minimize the effects of these calamities to our lives.

We cannot even discount man-made calamities and destructions such as accidents, massacre, terrorism, war, genocide and diseases that have killed thousands and if not millions of innocent people in the past.

But, I don’t consider these cataclyismic or apocalyptic events as the ‘end of the world or mankind’ (as feared by doomsayers) but  could be the end of the ‘world’ as we know it (part of natural cycle of the planet).

Sorry to tell you (doomsayers), I don’t believe ‘God created the world and destroy it in the end’ because in the first place we call God as the ‘Creator’ not a destroyer.

I personally don’t believe in the ‘judgement day’ because I do believe we are making our own lives based on our own decisions and actions and we can see the effects in the future under the Universal Law of Karma – the cause and effect.

If you (false prophets) keep ‘sowing fear’ by predicting events or misinterpreting visions to scare people about destructions and incurable disease and sensationalize them for your own advantage, then I would wish you must suffer first before anybody else on this planet.

Many verses in the Bible have warned mankind about false prophets:

Jeremiah 23:16
This is what the LORD Almighty says: “Do not listen to what the prophets are prophesying to you; they fill you with false hopes. They speak visions from their own minds, not from the mouth of the LORD.

1 John 4:1
Dear friends, do not believe every spirit, but test the spirits to see whether they are from God, because many false prophets have gone out into the world.

Now, if you believe you’re seeing things that could happen in the future (precognition) , the best way is to encourage the people to be cautious and do whatever means to survive or live. Pray and meditate to build a stronger faith with GOD.

I also suggest to learn how to visualize using our MIND to reverse such ‘events’ by building a very good LIFE on this planet. Hold an image of your own future – dream house, car, career, family.

Some metaphysical practitioners also suggest to invoke the intervention of the Higher Beings, whatever you may call them to help mankind find ways to prevent or save from any destructive events in the future.

I do believe GOD gave us all the necessary resources and gifts to make our lives meaningful to live, to build a good life not to destroy it and do whatever means to SAVE LIVES, EVOLVE and spread HIS UNCONDITIONAL LOVE. Namaste.