Metaphysicists, paranormalists, wiccans and spiritualists including healers use the energy of the Moon according to the intention of their rituals and practices.

The favorite moon phase is FULL MOON, which mostly believe the lunar energies are at full blast during this manifestation. Though other phases like waning and waxing have special purpose.

Moon appearances in the night skies have many interpretations based on the feeling, sense and intuition of the viewer though most of the time we prefer to relate such images in folklore supertitions. 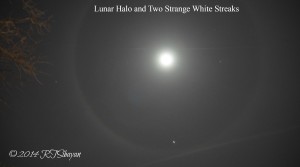 Recently, Moon Halo baffled night sky watchers  with the variation of interpretations mostly believe about the manifestation of calamity.

Scientifically, halos – either around the Sun or the Moon, according to Hyperphysics (http://hyperphysics.phy-astr.gsu.edu/hbase/atmos/moonhalo.html), are produced by the refraction of light in tiny hexagonal ice crystals in the air. With the 60° apex angle of the prism formed by extending the sides of the crystal and the index of refraction of ice (n=1.31) one can calculate the angle of minimum deviation to be 21.84°.

The UP Astronomical Society says “Lunar halos are mostly due to refraction of moonlight that passes through ice crystals present in thin clouds,” when cirrus and cirro-stratus clouds are present in otherwise clear skies. Cirro-stratus clouds bend light at a 22-degree angle which forms a halo of 44 degress in diameter.”

“The effect is highlighted by the fact that only bright stars are visible in the night sky when there are cirro-stratus clouds. The brightness of lunar halos depends on how bright the moon is and how thick the clouds are,” UP Astrosoc noted.

Despite scientific explanations about the moon halo, most Filipinos prefer to interpret such phenomenon based on superstition and folklore beliefs.

– Some say, moon halo could make people fall in love with someone who won’t love them back.

– It foretells an impending storm and the number of stars inside the moon halo predicts the number of days before the start of the storm.

– When the moon points upwards, the weather condition will be good and when points downward, it will rain.

– If a large star or planet seen near the moon, we can expect violent weather condition, while fog and a small moon together could bring easterly winds.

– Other weather ‘readers’ say the moon halo phenomenon could bring catastophic disasters, though it all depends on how large the effects are and what place could be hit.

There are other superstition, myths and beliefs about moon phases not only lunar halos as posted in paganwiccan.about.com:

Maybe, you have something to add about these folklore or superstition beliefs about the phases of the moon and the lunar halo, kindly post them. Namaste.