Three weeks after the Malaysia Airlines flight 370 lost in radar on March 8, still the International search teams have not seen so far strong evidence that could prove where the airliner crashed in the Indian Ocean.

CNN reported that the “search teams are now focusing  on 1,100 kilometers (680 miles) to the northeast from where they’d been concentrating for more than a week, and it’s closer to the Australian coast.” I don’t want to speculate but if you take a look at the #43 triangle Grid system, it looks like ‘the search’ is near or on that point on the map. Thi is just a theory but the most important we hope and pray they could find any debris of the ‘lost’ plane.  Check out for more reports about MH370

More objects spotted by satellites but visually not found.  Recently, Thai satellite has spotted 300 objects floating in the Indian Ocean. The discovery comes just a day after Malaysian officials announced that another satellite had found 122 pieces of something floating a 125 miles away.  More: Thai Sat spots 300 objects

STILL NO CLUES on the lost Malaysian Airlines 370 which allegedly ended it’s flight in the Indian Ocean. Satellites have spotted 122 objects, but visual search of planes and ships failed to find anything on the water. Check out more on this report: ABC’s Update on Malaysian Airliner

Earlier, The Malaysian government has concluded based on the analysis of the United Kingdom’s Aviation Accident Investigation Branch (AAIB) and the UK-based Satellite Company, that the missing plane MH370 flight path ended in the middle of the Southern Indian Ocean, West of Perth, Australia.

With this development and if other theories are ruled out, whether or not they could find any debris or wreckage of the plane, I can suggest that the Malaysian plane Boeing 777-200 encountered the effects of the ‘planetary grid system’ – a triangle in the Indian Ocean.

David Wilcock explained such theory based on Ivan Sanderson’s Vile Vortices which could have caused the disappearances of marine ships and aircrafts in some parts of the globe.

This Planetary Grid are clustered into 12 key locations in the whole world; locations were equidistant from each other; and if connected the dots, it formed a sacred geometry of the ‘icosahedron.’

The most popular of these 12 key locations is the Bermuda Triangle also known as the Devil’s Triangle located in the Western Part of the Atlantic ocean which is a connected dots between the Bermuda Island, Florida, Bahamas and Puerto Rico.

Of course, it is hard to believe that the incident could happen anywhere in the East because Bermuda triangle is in the West.  But most of us are not really aware that Bermuda Triangle is only one among 12 key locations of the Planetary Grid Sytem also known as Earth’s Energy Grid – which is a as a web that holds or links the Earth together. The energy grid is effected by many influences – electricity, magnetism, light, color, heat, sound and matter.

The planetary energy grid operates through certain geometrical patterns that follow a specific symmetry. The grids meet at various intersecting points forming a kind of matrix. This is equivalent to the acupressure points on our bodies. These grid points can be found at some of the strongest power places on the planet.

The Planetary Grid System is consists of Curry, Hartmann, Ley lines, Schumann waves, and black lines that has an effect on life.

Curry lines are a global grid network of electrically charged lines of natural origin. These lines run diagonally to the poles (true or magnetic?) and were first discovered by Dr. Manfred Curry and Dr. Wittmann. The lines themselves are not seen as a problem, only the points where they cross, and obviously lines which run in this way will have numerous intersecting points. As the lines are electrically charged, the intersecting points are either double positives, double negatives or one of each. From his studies Dr. Curry felt that the positively charged spots lead to a proliferation of cells, with the possibility of cancerous cell growth, whereas the negatively charged spots could lead to inflammation.

The Hartmann net consists of naturally occurring charged lines, running North-South and East-West. It is named after Dr. Ernst Hartmann, a well regarded German medical doctor, who first described it soon after t 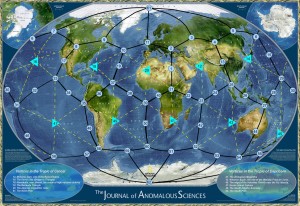 he second world war. Alternate lines are usually positively and negatively charged, so where the lines intersect it is possible to have double positive charges and double negative charges, or one positive and one negative charge. It is the intersections that are seen to be a source of potential problems.

Ley lines are generally recognised as man-made phenomena, occuring where “sacred stones”, which have somehow been charged energetically, are laid in a straight line. The lines appear “naturally” and spontaneously if at least 5 such stones are placed in line within a distance of 25 miles. The stones can be large or small, and the method of charging is thought to be activities such as heating, or impacting with considerable force against other rocks. Other methods could also include ritual washing with spring water, or vibration through the influence of sound.

Schumann waves are naturally occurring, beneficial electromagnetic waves that oscillate between the Earth and certain layers of the atmosphere. They were first identified in 1952 by Professor W.O. Schumann, a German scientist. He found that these waves have similar almost the same frequency as brain waves and follow a similar daily pattern. It has been suggested that these waves help regulate the body’s internal clock, thus affecting sleep patterns, hormonal secretions, the menstrual cycle in women and so on.

Black lines seem to be naturally generated, although quite how is not known. They may be localised and do not form a network in the same way as Hartmann and Curry lines. This could be similar in nature to the “sha”, or deadly energy lines of Chinese Feng-Shui. They can be curved, straight, at ground level or higher, even found in the upper levels of buildings. There have been described 2 types of Black lines, one as “black and depressed”, the other as “shiny, black, hard and sharp.” They could possibly represent the flow lines of a negative type of “orgone-type” energy as described by Wilhelm Reich. 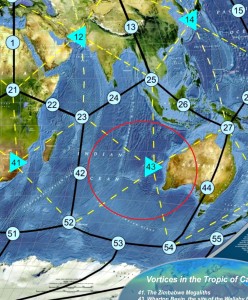 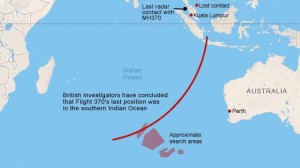 s  so near with the triangle located west of Perth in the Indian ocean is number 43.

Now with this development and analysis about Planetary Grid System, the conclusion is all yours. I repeat, this is just a suggestion or theory NOT CONCLUSIVE AT ALL. You Judge!